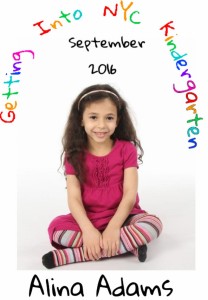 Public Kindergarten placement offers for September of 2015 came out in April. Which means the 2016 admissions season starts… now! Private consultants charge from $10,000 to $50,000 to guide you through the process. And high-end nursery schools guard what they know like it’s a state secret. Alina Adams has the inside scoop on getting into Kindergarten!

Here is your child’s schedule for applying for Kindergarten:

The majority of standardized IQ tests are normed in three month bands. That means that children are compared against their peers of similar age. It is always better to be on the older end of a band. For instance, the optimal time for your child to take a test is at the age of 4 years, 5 months, and 3 weeks. Not 4 years, 6 months, and 1 day. In the former, they will be among the oldest children. In the latter, they will be among the youngest. In that case, you should wait until they are 4 years, 8 months, and 3 weeks, and so on.

The test for Hunter College Elementary is given in the fall. The test for public school Gifted & Talented programs is given in the winter. You have little leeway there on when exactly to schedule the test, but try your best to follow the above guidelines. The ERB, on the other hand, can be taken as soon as your child turns 4, even in the spring before the fall when you will start applying. (Yes, almost a year and a half before your child will start Kindergarten.) It can only be taken once in a six-month period.

Another good time to take the ERB. The office is less crowded, so you’ll access your results quicker and, if your child gets sick, you will easily be able to reschedule. Slots really fill up in the fall.

If you plan to prep your child for the Hunter or the G&T test, now is a good time to start, with no school and the pressure off. You can do it in fun, manageable increments, instead of trying to cram at the last minute. (You need to keep the kid entertained in some way all summer long, you might as well make it productive.)

Some private schools begin putting their applications up online. While most attempt to interview everyone who expresses interest, there are schools that stop accepting applications after a set number has been received. If you love a school, make sure you get your forms in ASAP, and with plenty of time to snag an appointment at a time that works for you and your child.

Hunter College Elementary School applications go on line. You have three weeks from the time you file to get your child tested by an approved psychologist.

Most private school applications due (check with each school individually).

Kindergarten Connect opens for registration. Placement is not first-come/first-served. Everyone goes into the same pool at the end of the cycle. However, parents have reported enough technical difficulties that it’s to your advantage to sign up early, so you have time to deal with a potentially malfunctioning system before the deadline, and confirm that you application has been received.