Why should you be concerned about GMO foods in your baby’s diet? There are 3 very powerful reasons:

FDA scientists repeatedly warned that genetically modiﬁed (GM) foods could cause serious health problems, but political appointees at the agency— under instructions from the White House — fast-tracked GMOs without safety tests.

Why would we approve the consumption of [GMOs] without prior clearance and study by independent investigators? I can only think that money is the reason.

“Genetically engineered foods contain new proteins that children have not been previously exposed to. I believe this may be responsible in part for the profound increase in allergies and immune dysfunction that I am witnessing.”

Swapping genes between organisms can produce unknown toxic effects and allergies that are most likely to affect children.

How many more children are going to be damaged and have problems for the rest of their lives because no one paid attention to chemicals? It’s exactly The same with GMOs.

When my patients stop eating GMOs, they get better.  If GMOs were removed from the food supply, we’d have a healthier population.

What is a GMO food?

A GMO is the result of a laboratory process where genes from one species—including bacteria, viruses, insects, animals, or humans— are forced into the DNA of unrelated plants or animals. This process is fraught with dangerous side effects.

There are two main types of GMO crops. The herbicide tolerant varieties are engineered to withstand high doses of toxic weed killers. These toxins, which are linked to birth defects, cancer, and hormone disruption, end up inside our food.

Other plants, like corn, are designed to produce their own poisonous insecticide in every cell. The insecticide, called Bt-toxin, breaks open the stomach of certain insects to kill them. Recent evidence shows that Bt-toxin can also break the walls of human cells.

Bt-toxin from GM corn was found in the blood of 93% of pregnant women and 80% of their unborn children.

Some dairies still inject genetically engineered bovine growth hormone (rbGH or rbST) into their cows. This controversial drug, which is banned in Canada, Europe, Australia, and Japan, and condemned by the American Public Health Associa- tion, produces high levels of the cancer-promoting hormone, IGF-1, in the milk.

Children are More Vulnerable to the Dangers of GMOs

Infants and young children are more sensitive to chemicals or toxins. Their immune systems and blood brain barriers are not fully developed. They eat more and metabolize their food at higher rates. Infants are three to four times more prone to food allergens, even tiny amounts. 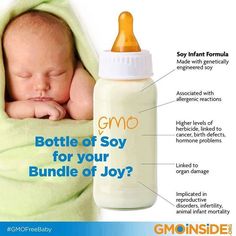 In addition, these brands almost certainly contain derivatives from GM corn and milk from cows treated with GM bovine growth hormone. The government’s WIC program, which distributes free infant formula to more than 2 million moms in all 50 states, only offers GMO brands.  Note: The only commercial non-GMO infant formulas that we have identiﬁed thus far are the organic brands.

GMOs are Also Found in Cereals

Derivatives of these GMOs, such as vegetable oil, corn syrup, and soy lecithin, are found in more than 70% of supermarket foods.  GMOs are also fed to animals that provide meat, milk, and eggs.

To avoid GMOs, you can avoid brands with the at-risk ingredients, purchase organic products, or look for non-GMO labels, especially the third party Non- GMO Project Veriﬁed seal. To make it easier, go to NonGMOShoppingGuide.com or download the free iPhone app ShopNoGMO, for a list of thousands of veriﬁed non-GMO products.

GMOs are not needed

In spite of hype by the biotech industry, experts and independent studies conﬁrm that the current GMOs are not a viable way to feed the growing population, do not increase yields, do not reduce herbicide use, and have not been proven safe.

What You Can Do

§       Join the Non-GMO Tipping Point Network to help get the word out with others in your area.  Let’s reclaim a non-GMO food supply.

Baby in NYC
We are an information hub for expectant and new parents with infants aged 0-24 months. We bring you pertinent guides and articles from local experts – your neighbors, in New York City. We also offer Giveaways and resources like a budget-based or themed Baby Registry, or where to source good quality, USA-made Baby Goods, and we host a local directory of services and products aimed at babies and toddlers called Babes List. Looking for a class? Check out our calendar under Baby/Toddler Events.

Want to Avoid 12 Hormone-Altering Chemicals in Your Breast-Milk?

Your NYC Neighbor: Callie and Denise from SkipKid

Why use a Jogging Stroller?

The #1 Guide for Parents with Babies 0-24m. We live love play here.

Your NYC Neighbor: Callie and Denise from SkipKid

Why use a Jogging Stroller?

To be updated with all the latest news, offers and special announcements.