On February 11th (2016) the Daily News ran a full-length feature article entitled “How Safe is Your Child?” It struck a raw nerve amongst New York parents already shaken by recent rogue nanny stories.

Journalist Greg B. Smith centered his story around the tragic death of 3-month-old infant Amir Millington who was dropped off to daycare by his working mom. At around 3pm the daycare’s operator Karen Ballard allegedly discovered baby Amir “motionless” and “unresponsive” in his bassinet. Ballard then ran into the street with the infant asking for help. Finally she dialed 911. What transpired next best exemplifies the dangerous risks inherent in the private childcare sector.

Ballard did not immediately follow basic CPR procedures. She did not act in a calm manner. And while we do not know how or why Amir died, we do now understand that Ballard was left alone with 11 preschool children on that fateful day. This was clear a violation as the State of New York requires that one adult be left in charge of no more than six children, and that, at least one person be trained in CPR per licensed daycare facility. Ballard later claimed to be proficiently aware of CPR practice.

The problem in the daycare managed by Ballard is not unique. Over-crowding is endemic amongst City daycare centers as parents struggle to find affordable childcare while they are out at work. In turn, daycare centers are often overly burdened to find daycare workers willing to work long hours for low pay and often with very few benefits. Turn-over of daycare staff is notoriously high and that alone creates a chaotic emotional life for the often, very small children, left in collective care.

There are 9,241 State regulated daycare centers, and 2,272 City regulated daycare centers. Unlicensed daycare centers exist but the exact numbers are unknown. Suspensions and revocations of city daycare licenses tripled from 49 in 2011 to 145 in 2015. From 2013-2015 five children died in daycare, eight children were seriously hurt , and daycare staff lost track of nine children left in their care. Conditions in daycare facilities can be poor: sewage leaks, blocked fire exits and cockroaches in the refrigerator. All violations are removed from the city system after 2-years. So how can any parent reliably check the quality of a particular daycare center? The answer is of course – that they can’t.

It is easy to attack individual daycare managers or centers and even an individual State but what we should focus on is the lack of support and over-sight offered to licensed daycare centers by the Federal government. Our government subsidizes the auto industry and industrial agriculture – but what about our working families? And what about our daycare workers?

One daycare facility accused of over-crowding stated that she couldn’t turn working parents away because she was concerned where those desperate parents would turn. Doesn’t that speak volumes? The demand for quality childcare stretches across the economic spectrum. While the affluent can cherry-pick a top educated nanny or a high-end daycare center, many working Americans must hustle to find a safe-enough childcare option. This isn’t a good situation and as more parents are forced to work long hours and sometimes two jobs just to sustain a basic standard of living – the tangled, over-burdened system of daycare childcare will continue to pose a risk to our precious children. But there are ways you can help to prevent placing your child in harm’s way.

How qualified are the daycare staff?
How many staff members can provide CPR?
How many care providers are there per number of children? (It is recommended that one daycare professional be responsible for a minimum of three children under the age of two, or three children aged two-five.)
Daycare centers should offer age-appropriate developmental toys. Are the toys on site appropriate for enriching your child?
How much media: TV and computer time is allowed per day?
What are daycare staff paid? Do they receive benefits? (Health insurance, sick pay, paid holidays)
Is the daycare center close to your home or job? Can you pop in unannounced?
Does the facility appear noisy and over-crowded?
How secure is the daycare center? How are staff screened? What security is in place with regard to the general public? Can anyone just walk in?
How do staff monitor sleeping infants? How are babies put down for naps?
How clean is the daycare center? How often are sheets, towels, bedding and toys cleaned?

For a more comprehensive guide to finding the best daycare center for your family, please read my new book: The Nanny Time Bomb: Navigating the Crisis in Child Care. 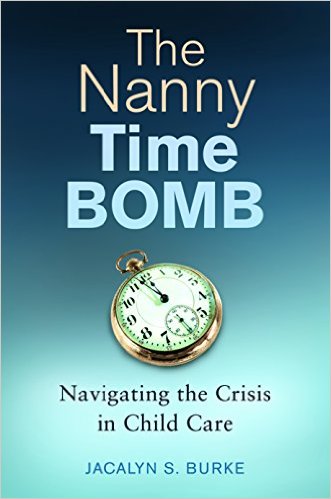