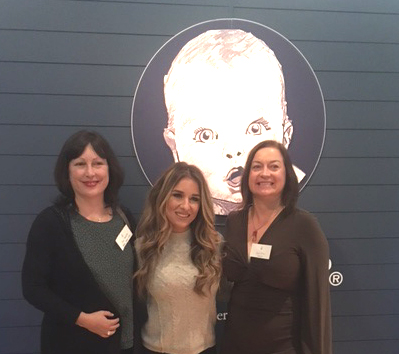 Lynne and I got to check out first hand how Gerber’s line of baby food is sourced, pureed, tested and packaged. The first person we encountered was celebrity mom Jessie James Decker who is committed to infant nutrition. Jessie talked about why she is Gerber’s ambassador on this issue, in particular, because she is the proud mama of three-year-old daughter Vivianne Rose and one-year-old son Eric Thomas II.

Jessie James Decker is a talented country singer, songwriter who burst onto the music scene in 2009 with her self-titled debut album featuring the certified gold single “Wanted.” Jessie recently co-hosted CMT’s “Redneck Island” and previously starred in the hit E! reality series “Eric & Jessie: Game On” with her husband, superstar pro football wide receiver, Eric Decker. Together they launched the Eric & Jessie Decker Foundation which strives to positively impact the lives of United States military veterans, at risk children, and animals. Jessie is currently recording her upcoming album to be released in 2016 and enjoying time with her husband and two small children. Cool stuff!

Our first impression of this event was Gerber’s focus on fresh fruits and vegetables as exemplified by the displays of produce below. 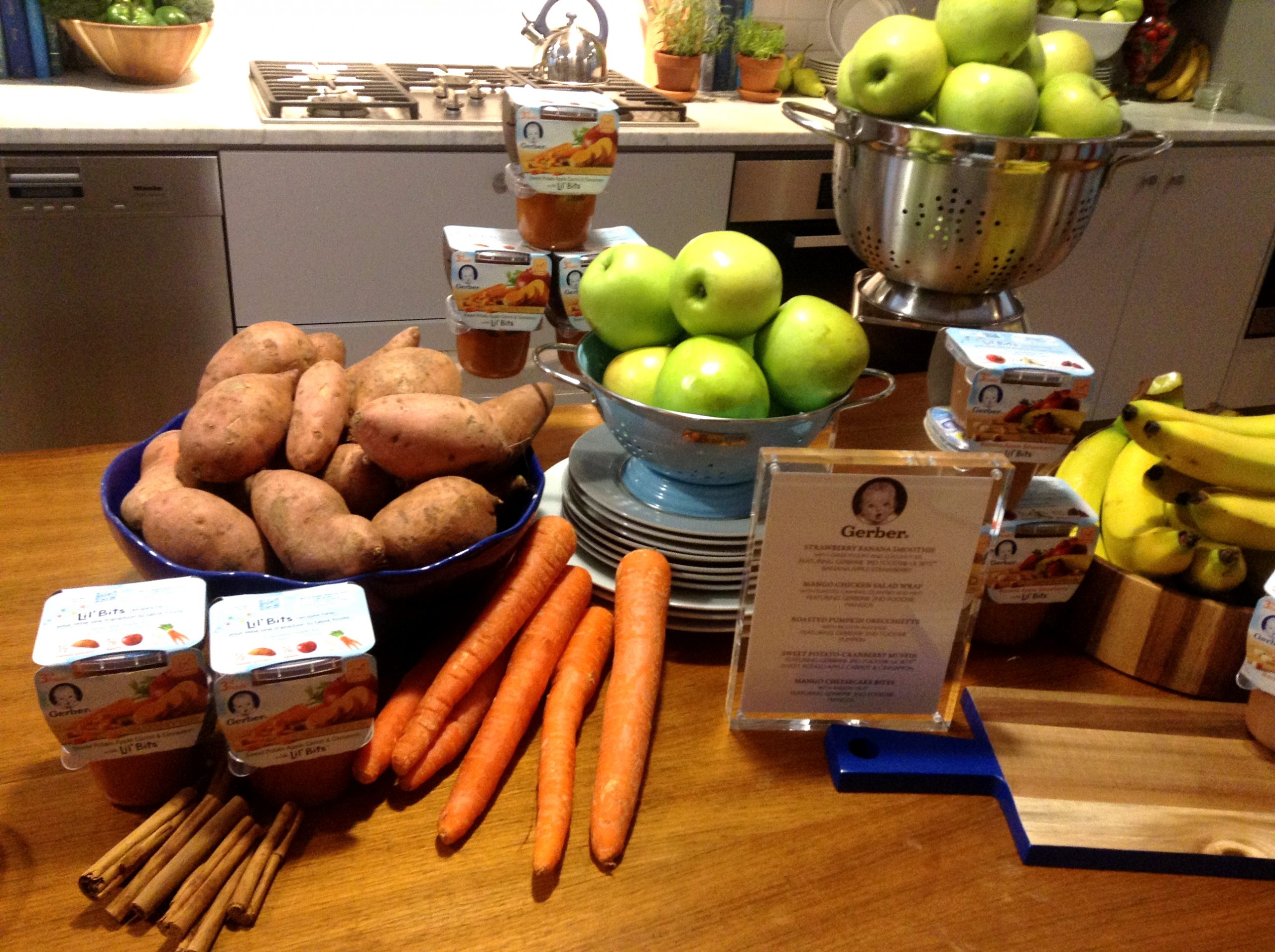 My second impression was that of farmers. Yes … real live farmers who actually run family farms. I’m a naturally skeptical person so I asked the farmers how they grew their produce (in this case apples). I wanted to know if these farms were generational (passed down from parents to children). I also wanted to know if they sprayed their trees with pesticides that are commonly linked to bee colony collapse. 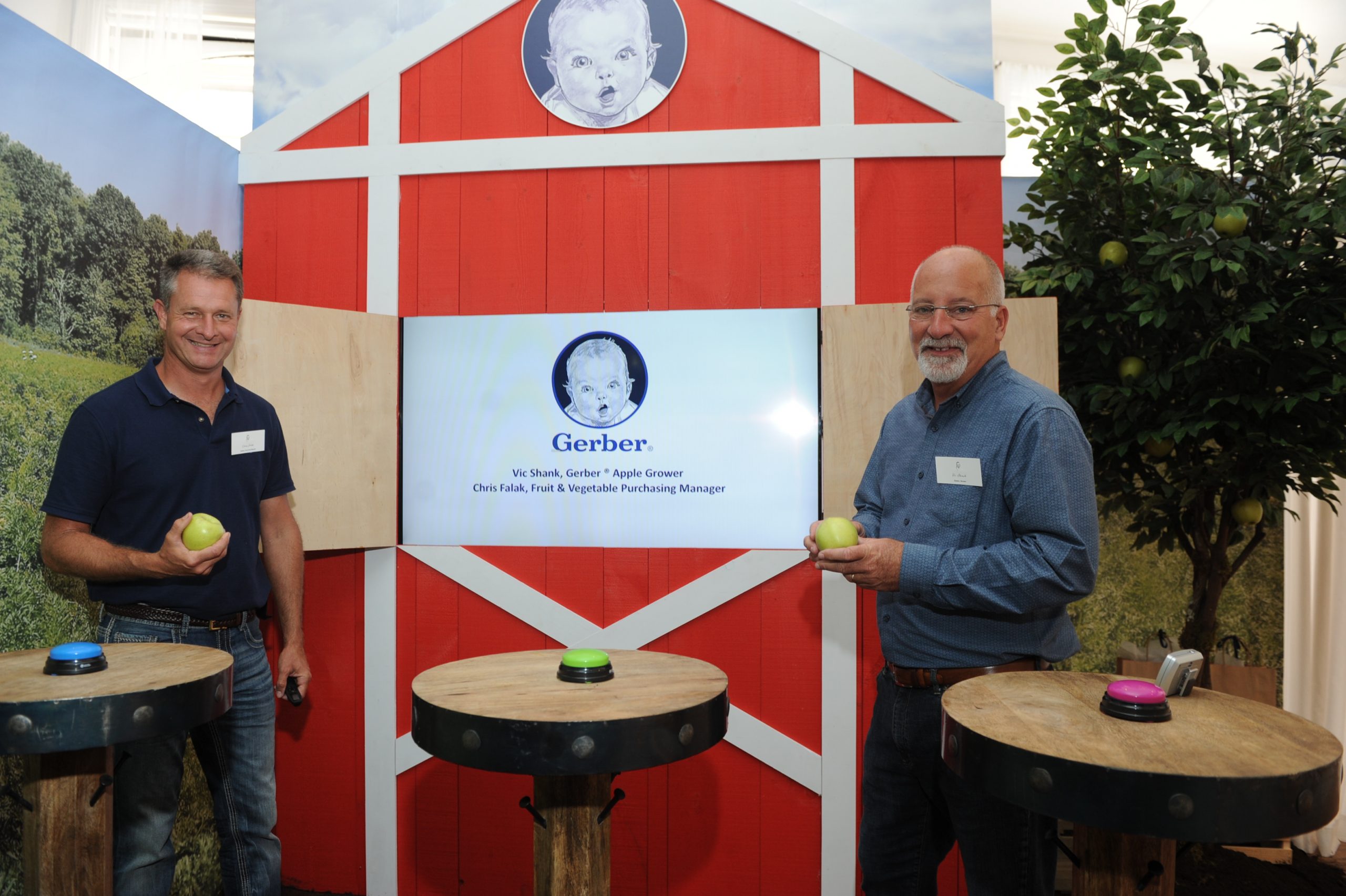 I asked the farmers about the bees and Victor Shank, President of Central Produce Sales told me:

“At Central Produce Sales, we only use American bees and actually have a fairly robust native bee population around our fruit farm. We work with our beekeeper to maintain the viability of his hives as well as our native hives. Our beekeeper actually even makes our farm the home for his hives in the off-season! On our particular farm, we use safe crop protectants, and ensure that they are always used per their label and with bee safety in mind.”

I was relieved to find out that not only is Michigan the home of Gerber, but they also have relationships with a local group of family farmers there. Many of their farmers in Michigan have worked with Gerber for more than 20 years.

As someone who advocates using locally grown, organic vegetables and fruits, and pureeing your own baby food – I did have some initial resistance to the idea of purchasing ready-made baby food. My issues were that the vitamins and minerals are often compromised during manufacturing.

“The last thing we do before our baby foods go into their tiny tubs is our Flash Cooked™ step that takes just minutes. We are the first and only baby food company in the country to use this technique. It’s one of our ways to ensure our fruits and veggies have the right flavors and texture, and are as healthy as fresh fruits and veggies.” Gerber
#3. Cold puree= taste & vitamins
I found this very interesting. Keeps the food fresh and tasty.

#4. Plastic containers that are PVC free.

Gerber informed me that this process called significantly cuts down on any nutrient loss. The packaging is plastic which I’m not a great fan of, but it is PVC free.  If you’re a busy mother or father Gerber’s baby food line is a healthy back-up or supplement to your baby’s main diet but it shouldn’t replace home-made, locally sourced, organic whole foods.

#5. GMO labels
We are focused on helping moms and dad to choose for themselves whether or not to feed their infant GMO grown foods. So the fact that Gerber labels GMO is a plus. 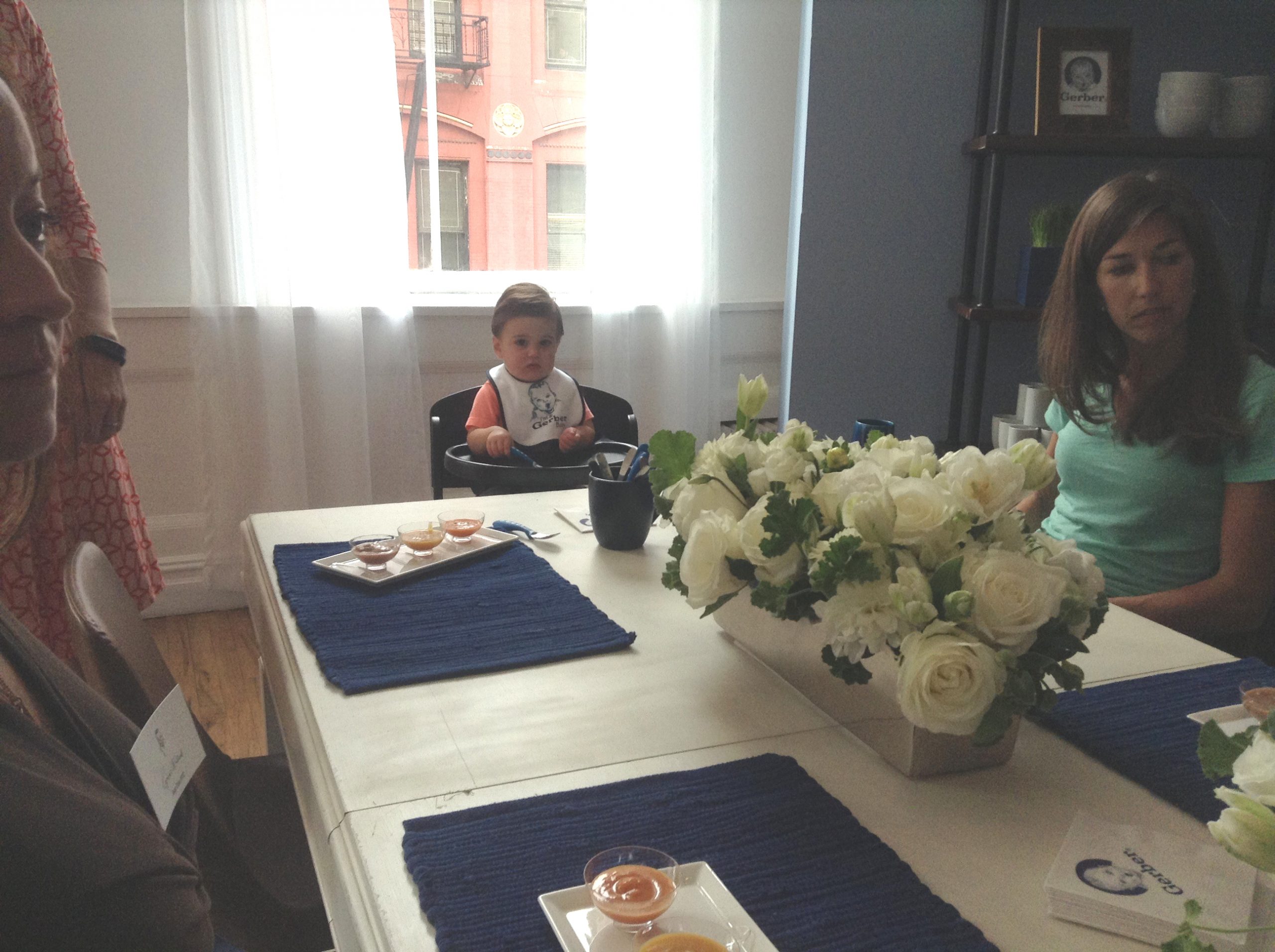 Next up, we were led into a mock dining room where at one end sat an adorable toddler (see above). He made lots of “ooohhhhhhs” and “ahhhhh” noises when the trays of pureed foods were brought in. Our little taste tester tried the three samples of food (as seen above) and even “goo-goo gaa-gaaed” for more. On a screen behind us was a stream that showed babies and toddlers testing Gerber’s foods.

A Gerber nutritionist then explained how they select blends of fruits and vegetables based upon two things:

I understood how taste blending works. Bananas and apples are routinely used to add some sweetness to bitter tasting vegetables, for example. Gerber uses babies in different age groups to try out new flavor blends.

“A panel of 2,000 babies tests our Gerber foods before they can be found on shelves to make sure they’re as delicious as they are nutritious.” Gerber

I like to learn something new and Gerber’s nutritionist taught us how infants primarily feed, using the front of their mouths and a sucking action – which means that the first foods we introduce to our infants must be compatible with that feeding pattern. Gerber’s baby foods are prepared according to developmental milestones so it’s really important that parents only buy food according to their infant’s milestone.

As babies develop, however, it’s very important for them to use different parts of their mouths: their tongue, their gums and their new milk teeth – to experience the sensation of texture. The benefits of introducing texture might be obvious but it’s been established that if your baby isn’t appropriately exposed to texture, or more lumpy foods, then they could struggle later on to process finger foods and even later on whole foods.

#6. Taste & Texture
A big thumbs up for the taste and texture combo of Gerber’s baby food. Yes – we got to try some samples too. Yummy! 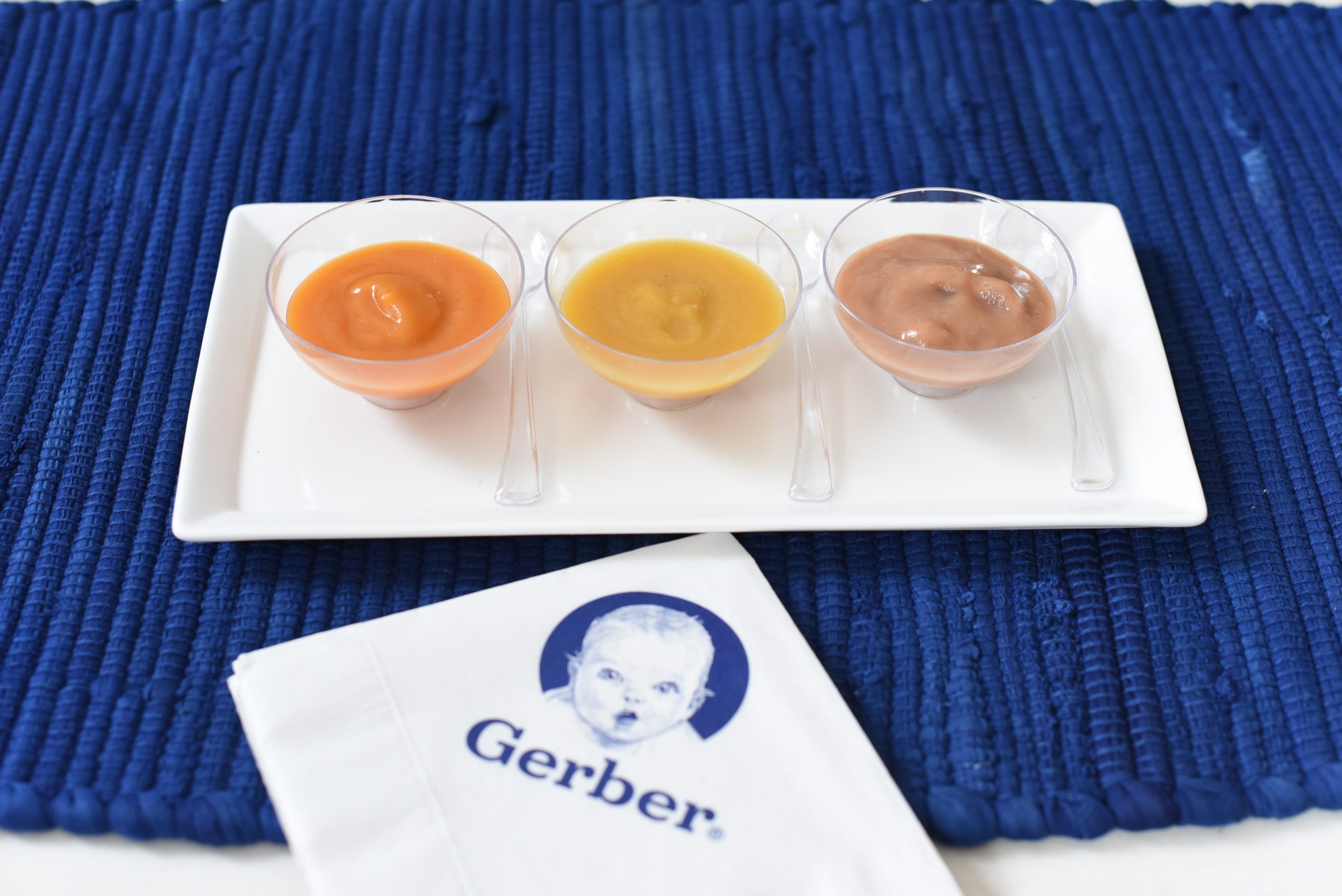 Gerber provided a tray of purees for all attendees to sample

It’s good to finish on the theme of choice. Gerber recently began to offer non-GMO soy baby formula and now labels its food as to GMO. It also offers parents the choice of organic food and this is an important distinction. Without diversity in our food supply we run the risk of exposing our babies to potentially harmful substances. Companies like Gerber are meeting the needs of modern parents. We encourage Gerber to continue to champion choice. 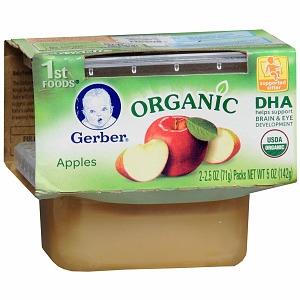 In conclusion, Gerber ticks off three of our favorite boxes: Made in USA, Transparency, and a Selection of Choices … and their food tastes great. Bravo!